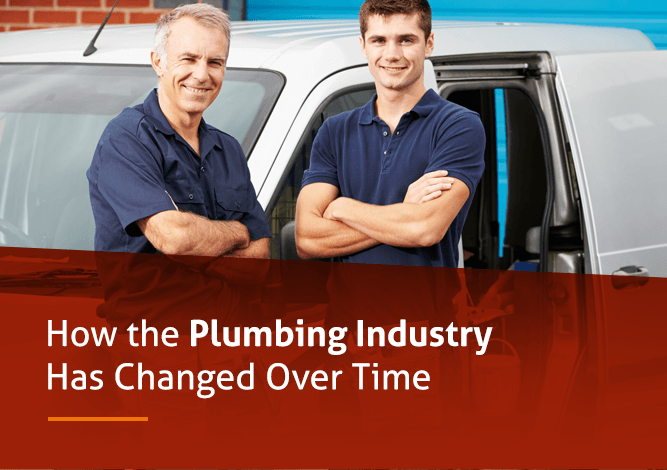 How the Plumbing Industry Has Changed Over Time

A recent American Community survey revealed that 1.6 million people and 630,000 households in the United States lack full indoor plumbing, meaning they don’t have at least one of the following: a bathtub, shower, toilet or running water. While those numbers may seem startling, the report, entitled “Still Living Without the Basics in the 21st Century,” shows that only 0.64 percent of all of the homes in America aren’t fully plumbed.

Although it’s difficult for many Americans to imagine living in a home that doesn’t have full plumbing, as recently as 60 years ago, it wasn’t unusual for a residence in the United States to not have plumbing. In 1950, approximately 25 percent of the country lacked plumbing. In rustic areas, a lack of plumbing was even more prevalent, with around 50 percent of the country’s rural population living without plumbing.

While many people take the plumbing in their homes and workplaces for granted, or view it as a convenience of living in a modern society, plumbing is neither something to be overlooked until needed nor the result of modern society. With plumbing’s roots dating back to at least 3,000 B.C., Memorial Sloan-Kettering Cancer Center in New York City credited plumbing with being more critical to improving health in underdeveloped countries than new medical facilities.

Dr. Lewis Thomas, a famed physician, immunologist, poet, etymologist and essayist, pointed to plumbing as the reason public health improved over past centuries, because it lessened the spread of disease and reduced water contamination by human waste.

The first modern flushing toilet was invented by Sir John Harrington, the godson of Queen Elizabeth I, in England in 1596. Since the queen’s godson’s name was John, people began to refer to the toilet as “the john” over time. Even though it was originally invented nearly two hundred years earlier by a different person, the flushing toilet was initially patented by Alexander Cummings in 1775.

Flushing toilets are widely considered to have saved more human lives than any other invention throughout history.

The History of Plumbing

Plumbing’s origins can be found in ancient civilizations that cross cultures and continents, including Greek, Roman, Persian, Indian, and Chinese societies. As far back as 3,000 B.C., Menes ordered Egyptians to build canals, basins, and irrigation ditches throughout the country over which he ruled to collect floodwater. There is evidence that red clay and chopped straw were used to make water pipes in India’s Indus River Valley around 2,700 B.C. Just six hundred years later, Egyptians crafted group toilets from stone. Believing the deceased deserved the same amenities as the living in the afterlife, the Egyptians even erected toilets in tombs. The Egyptians are also credited with using copper pipes to create complex irrigation and sewage systems.

King Minos of Crete created rainwater cisterns and sewage disposal systems which had crude flushing toilets in 1,500 B.C., 1,000 years before bathtubs lined with lead first appeared in the north of Greece. By 312 B.C., aqueducts carried more than one billion liters of water over 50 miles to provide fresh water to the residents of Rome every day. In 52 A.D., Rome had approximately 220 miles of aqueducts, water channels, and pipes , which supplied water to the city for various private and public purposes.

Before the fall of the Roman Empire around 376 A.D., the Romans developed some of the most sophisticated plumbing systems of their time. The Romans had underground sewer systems, public and private baths, and lead and bronze pipes. By using lead pipes, the Romans dramatically improved the sanitary conditions where they lived.

While the advancements that ancient civilizations made in plumbing remain impressive, innovations in more recent centuries and decades are equally remarkable. More recent plumbing inventions, achievements, and developments are presented below along with the year in which they occurred:

The Future of Plumbing

Whether you’re currently a plumber or you have aspirations to be one, the future is bright for the plumbing industry in more ways than one. For beginners, job growth in this sector is expected to grow faster than the average for all occupations between now and 2024. According to the Bureau of Labor Statistics, the number of plumbing jobs available throughout the United States will increase 12 percent between 2014 and 2024 .

This means that more than 49,000 plumbing positions are expected to be added to the nation’s workforce between 2014 and 2024.

Just as in past centuries, the plumbing industry will also continue to require innovative thinking and creativity. While industry pioneers have tried to make plumbing more efficient and cost-effective for decades and will continue to do so, technology allows for even more innovations to be possible in the future. If you’re an outside-of-the-box thinker, you may be able to incorporate technology into indoor plumbing in unprecedented ways.

Some technology-infused plumbing innovations that may become the norm in the future include the following:

The demand for smart or green plumbing also presents opportunities for current and future plumbers. Plumbers will be called upon to replace outdated fixtures with lead-free alternatives to prevent drinking water from being contaminated with lead. They will also be asked to replace older, inefficient water heaters with units that operate using solar power.

Plumbers will create smart water catchment greywater systems for homeowners, as well. These systems reuse water that was used in a person’s home for land irrigation. By adding green plumbing features to a person’s residence, a plumber can help increase the value of the individual’s home.